The length of your towbar matters! Here’s why 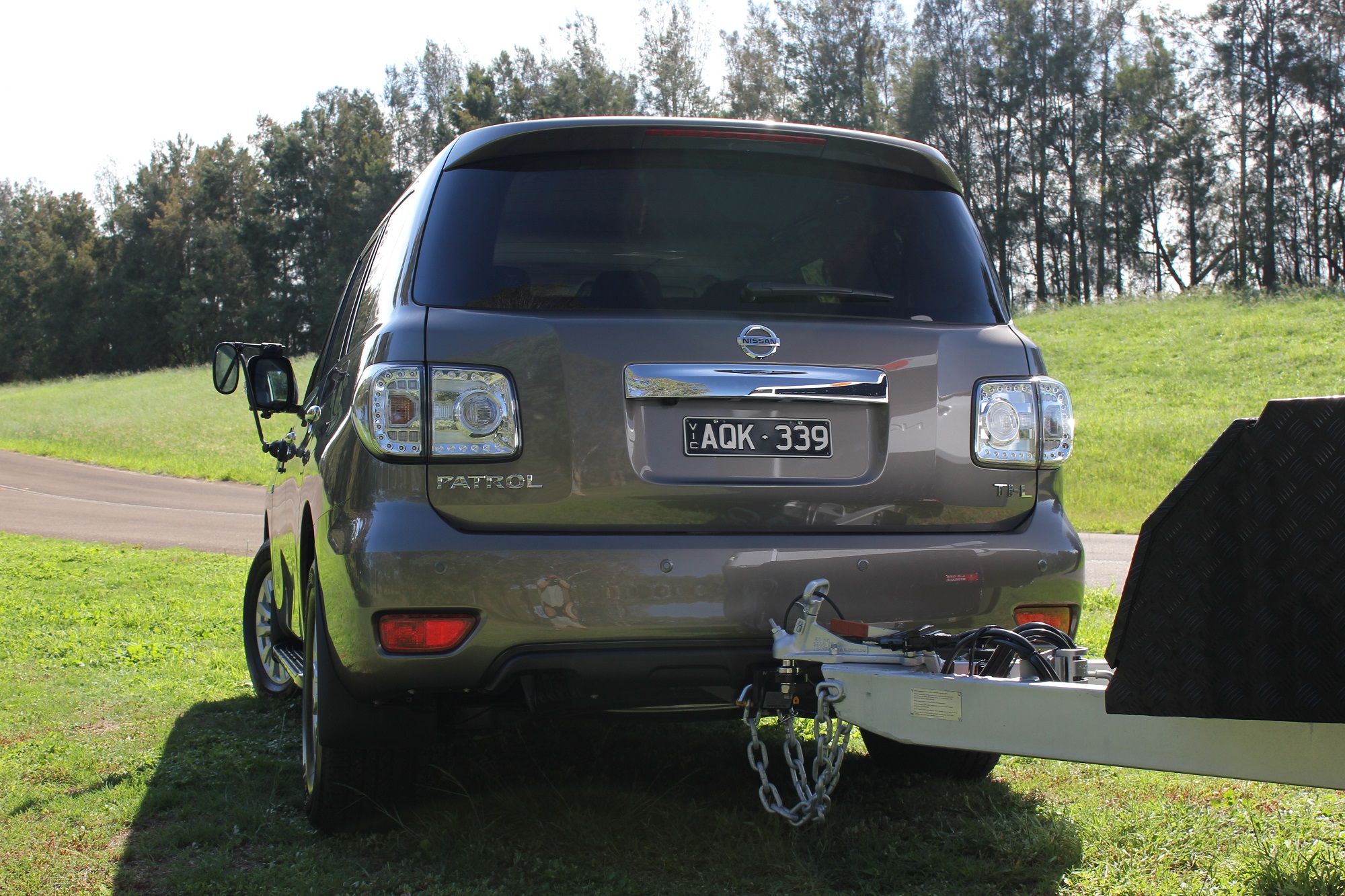 In the length of your towbar matters, here’s why, we explain the effect it has, along with wheelbase, on the dynamic performance of your tow vehicle.

In the first part of Understanding the dynamics of towing, we looked primarily at the effect towing a caravan or trailer has on the overall vehicle-trailer combination, now we will have a more detailed look at what affects the tow vehicle. One of the important things to consider in a tow vehicle is wheelbase and towbar lengths. In general, a longer wheelbase (axle-to-axle distance) and shorter towbar length (rear axle to towball distance) will make for a more stable tow vehicle. Let’s look at why that is.

In the above drawing, we can see the two vehicles, one with a 500mm axle to towball distance, the second with a 750mm axle to towball distance. Now, using leverage calculations, we can calculate what the same side load or lateral load (red arrow) on the towball will have (blue arrow) on the rear wheels with the 750mm towbar length compared to a vehicle with a 500mm towbar length. Let’s assume that the caravan or trailer doesn’t impart a sideways load on the front axle. The front axle then effectively becomes the pivot point.
Oh no … here comes the maths! I’ll keep it simple. The acting forces are calculated (Second Class Lever) using:

Now for the maths.

We learned in part one that there is an effect called ‘dutch roll’, most often felt when on motorways where the inside lane has been worn down to two grooves by heavy vehicles and the caravan or trailer is ‘hunting’ between these grooves. This will set up a rolling motion in the caravan and will have the effect of trying to move the hitch from side to side. As the vehicle and caravan travel forward, the undulations will also set up a rocking backwards and forwards motion in the caravan, which has the effect of first lightening the load (nose weight) on the hitch, then increasing it. The combined effect of this is the caravan hitch will move in a circular motion first sideways then down, then sideways in the opposite direction and finally upwards again, repeating continuously. This is one source of lateral load on the towball.

The rear tyres only have so much grip. The grip the tyre has is a function of the friction of the road surface, the friction of the tyre compound, the tyre pressure and the axle load. (Formula 1 fans know it should include the temperature of the road surface and the tyre temperature as well.) This grip is not unlimited; this is easily displayed when trying to pull away rapidly and the tyres spin, likewise when trying to stop quickly the tyres’ lock-up’ and start to slide (until ABS takes over!).

If we were to put a rope through the rim of the rear wheel, it might only take a ‘pull’ of 300kg to drag the rear of vehicle sideways on the road. As you start to apply the force, the tyre wall will deflect and distort the tyre reducing the grip available (more about this later). A static wheel on a vehicle has the most grip, as soon as it starts to rotate, this grip reduces and will continue to reduce the faster the wheel rotates. This is one reason a car can go round a sharp corner at, say, 30km/h but at 50km/h, the dynamic side load has increased, and also the grip (friction) the tyre has on the road has also reduced, and the rear end will slide outwards resulting in a skid.

Does the length of wheelbase matter?

Let’s revisit our earlier calculations to see what happens:

We now calculate for differing wheelbases:

Given the same 100mm of sideways movement of the towball by the forces imparted on it, basic trigonometry demonstrates that a short-wheelbase (2000mm) vehicle is deflected 2.3 degrees off path, while the same 100mm of sideways movement only deflects the longer-wheelbase (2500mm) vehicle by 1.9 degrees. While this does not seem much, remember, you can usually feel though the steering wheel if the tracking is out by more than half a degree, so the lateral push/pull felt in a short-wheelbase (SWB) vehicle will be more noticeable than a long-wheelbase (LWB) vehicle. While it will be easier to ‘feel’ the deflection earlier in a short-wheelbase vehicle, the long-wheelbase vehicle will be more stable.

Why are semi-trailer tractors so short then?

Earlier we were talking about the grip of the tyres on the road surface. There is something else to consider, though. We know that sidewall flexing has an effect on grip and as we have just seen, towing a caravan or trailer will put more lateral force on the rear tyre sidewalls. So what’s the solution?

“Put low-profile tyres on.” Okay, who said that?

That is one solution and, on the face of it, low-profile tyres would reduce the amount of sidewall flexing, therefore, be more resistant to the lateral forces imparted on it by the caravan or trailer. But before you rush out to change the tyres, let’s have a closer look at this.

With a ‘tall’ tyre (think: most of our 4X4 tow vehicles) there is quite a bit of ‘feel’ in the tyres, i.e. you can easily feel when something is pulling you from side to side well before the tyres lose grip. With low-profile tyres, the sidewalls still deflect but usually with little warning to the driver. The ‘feel’ is almost non-existent. The lateral load will increase without much ‘feel’ and the first you know of it … well, it’s usually too late as you have passed the limits of grip and the rear of the vehicle is being pulled side to side in the dreaded ‘snake’. Low-profile tyres are great if you are a racing driver and have super-sharp reflexes and know how much you can push the tyres to the limit holding back just before they break loose. If you don’t believe low-profile tyres deform, just watch the super slow-motion clips of Formula 1 cars clipping a kerb.

So what is the solution?

Well, normal-profile tyres actually. It’s the best of both scenarios, enough ‘feel’ to give you some clues all is not well and enough rigidity to help resist the lateral loads imparted by the caravan or trailer. However, you do need to check the tyre pressure guide in your owner’s manual for heavy loads and towing. For almost all vehicles, the manufacturer will recommend a higher running pressure in the rear tyres. Please check you own owner’s handbook for details, as there are exceptions for certain vehicles and wheel/tyre combinations.

So what does this all mean?

We now know there is only so much grip available at the rear tyres and some of that grip is being used to resist the sway of the caravan or trailer. If we brake, we also use some of this grip – possibly more than is now available which we don’t want to do. We also know (from part one, see below) that braking reduces the load on the rear axle as the centre of mass of the towing vehicle moves forward, therefore, reducing grip available still further. If we accelerate we also need some of this grip. Accelerating with 1500kg swinging about behind us will use a lot of the available grip, and we might just run out again, and we really don’t want to go faster at this point, do we?

What else have we learned?

Well, we have proved that a longer wheelbase is preferable to a shorter wheelbase given the same towing conditions and trailer. We have also proved with a bit of school maths that a short towbar to rear axle length is better than a long towbar as it imparts less sideways (lateral) force on the rear axle and tyres. We also now know why it is important to keep an eye on the tyre pressures and condition of the tyres on the tow vehicle, as they are now doing so much more work.

Is there a downside to having a short towbar?

Yes, there is. With a short towbar, the caravan or trailer will “cut the corner” more than a long towbar vehicle. So it requires a wider ‘sweep’ when going round corners. On the upside, when reversing the reduced length of the lever effect makes it slightly easier to manoeuvre as the steering effect on the trailer is slowed down, so it becomes less sensitive and gives you more time to react to a deviation off course, although you will have to put slightly more steering input to correct.